KingWear, a popular Chinese smartwatch brand, brings us a new smartwatch model - KingWear KW98. What new features does it have? Let’s find the answer through comparing it with KingWear KW18, a hot-selling smartwatch on GearBest. Both KingWear KW98 and KingWear KW18 come with a circular display — and this is what attracts a lot of classic watch lovers to these models. Although a lot of smart watches sport a techy square shape, a round display is the best of classic watchmaking tradition. So, if you want to wear an accessory rather than a piece of tech, you will definitely appreciate the design on both models.

One of the key selling points of both models is the fun changeable digital watch faces. With a nicely diverse selection of backgrounds, you will be basically sporting a new watch every day. The KW98 does sport more options, though, and its larger display offers a good platform for making a full use of the design feature. Now. let's get into the differences.

Screen: The KW18 comes with a 1.3 inch IPS touch screen featuring anti-scratch protection and 240 x 240 resolution. Those who are in favor of bigger display will find what they are looking for with the KW98 coming with a 1.39 inch AMOLED display, 400 x 400 pixels (286 ppi).

Body: when it comes to the size, both smartwatches are, in fact, very much similar. The KW18 measures 52mm x 44mm x 16mm while the KW98 is 55mm x 47mm x 14mm. The KW18's body is made with zinc alloy and metal plating and the KW98 sports a shiny aluminum frame.

As we've mentioned above, both smartwatches come with a nice set of health and fitness tracking features and both are SIM capable. This means that you can use both, the KW98 and the KW18 as a miniature phone: make and receive calls on your wrist, send messages, etc. 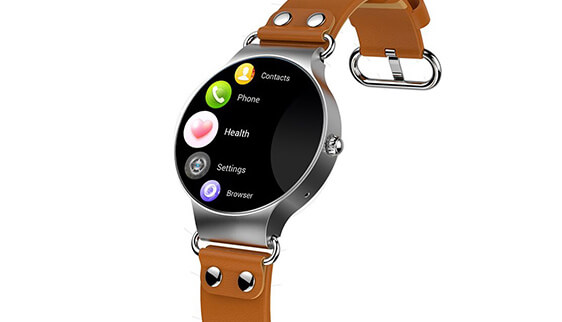 Both phones are equipped with Bluetooth 4.0 for efficient communication with your primary smartphone for syncing contacts, enabling notifications and more.

As for the health features, with the KW98  you will have the essential pedometer and live heart rate monitor, while the KW18 adds a sleep monitor and sedentary reminder into the mix. The KW18 also promises "everyday waterproof protection". This means that the watch is not waterproof per say and you still can't take it diving or take a bath while wearing it (in case that's been on your mind). But, the watch does not mind an occasional splash and won't self-destruct if you go for a jog in the rain. As you can see now, the key differences between the two models are on the inside: the KW98 comes with a more powerful processor, more RAM and more internal storage.

Now, here's where things get really different. You can get the KW18 at a very affordable price of $47.86. However, with the KW98, you will need to splurge — the smartwatch phone comes with a steep price tag of $103.43.

As with most of our comparisons, it all comes down to what you are looking for.

The KW18 is a smart budget watch phone that comes with all the health and fitness tracking functionality you have come to expect on similar devices. Plus, you get a nice round display and a nice selection of watch faces.

The KW98, though, is a significant step up — especially when it comes to the processing power, RAM and storage. Do you really need that much power on the smartwatch? That's up to you to decide. The much higher price for the KW98 may also be of big help in your decision making.